Tour Code: MYY6
Duration – Full Day
The tour to Lambir Hills National Park begins with a drive of about 45 minutes from Miri. Lambir Hills cover an area of 6952 hectares. Declared as a national park in 1975, Lambir is rich in bio-diversity and is visible from Miri as a chain of steep sandstone hills bound by rugged cliffs. The higher ridges and slopes (up to the peak at 450m) are covered by heath forest, while the lower slopes and valleys are dominated by huge strands of mixed dipterocarp forest. The ground flora consists of an unusual variety of palm trees, which give an exotic feel to the park. There are also more than 100 bird species in the park. Due to its rugged terrain, the park has a number of small but beautiful waterfalls, ideal locations for cooling down and enjoying the surrounding area. On arrival, you will take the walking trail to Latak waterfall.  Discover the diversity of plants of this rainforest, considered as one of the richest in the world. The trail crosses a suspension bridge, and takes about 15 minutes. At the end of the trail, relax at one of the shelters. You are able to swim at the waterfall and enjoy the cool, refreshing, mountain stream. Changing rooms are located nearby for your convenience. Don’t forget to pack your towel and swimming costume. A BBQ lunch will be served at the rest hut. 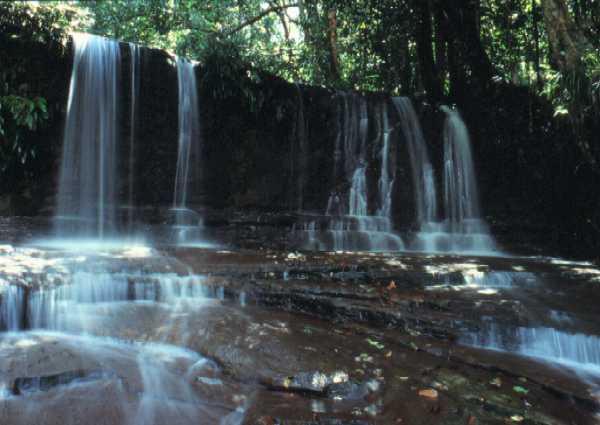 After lunch drive to Entulang, which is about 20 away Entulang. Entulang is an Iban Longhouse which houses about 50 families. The Ibans are the single largest ethnic group in Sarawak. You will be able to visit  the longhouse and the communal living quarters. A  longhouse is actually a number of rooms linked together but sharing a common ‘ruai’ – a verandah – where traditional ceremonies are preformed. There may be an opportunity to  try the famous rice wine – ‘tuak’ – which is brewed locally.

Return to your hotel in  Miri in the afternoon (Lunch included)
Photograph copyright to Pulau Sipadan Resorts & Tours Sdn. Bhd.
For those pushed for time, we also offer a tour which covers Lambir Hills National Park by itself – the duration is 4 hrs, departing Miri at about 09.00 hrs. Contact us for further details.
Photograph courtesy of Sarawak Tourism and Borneo Travel Network
Sarawak
Call Us now (+61 7) 3221 5777
×