Your guide will meet you at Banjarmasin’s Samsudi Noor airport and transfer you to Hotel Arum in Banjarmasin. Remainder of day at leisure. Dinner at local restaurant and overnight at Hotel.

Up for an early breakfast at the hotel then transfer to the airport to catch the flight leaving for Pangkalanbun which is located near the Kumai River. Pangkalanbun is near the South-Western “corner” of the island of Borneo. On arrival at Pangkalanbun you will immediately transfer straight to a Klotok (boat) for a cruise up the Sekonyer River which leads to Tanjung Puting National Park, to Rimba Lodge. Rimba Lodge can only be accessed by boat. Rimba Lodge is basic but comfortable, located on the edge of the National Park. 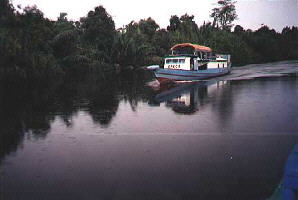 A KLOTOK ON THE RIVER TO RIMBA LODGE 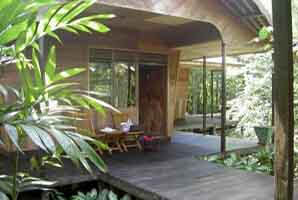 A CABIN AT RIMBA LODGE

Tanjung Puting National Park is the largest single protected forest in the Province of Kalimantan Tengah and the largest protected area of tropical heath forest and peat swamp forest in Southeast Asia. The area was originally declared as a Wildlife Reserve in 1935 and then as a National Park in 1982. Rimba Lodge provides an excellent base for trips up the river into the park.After checking in at Rimba Lodge, you will proceed to Tanjung Harapan in time for the Orang-utan feeding. Tanjung Harapan was the original site of the Sekonyer Village which was moved across the Sekonyer River. In the management of the park, the area surrounding Tanjung Harapan is designated as Utilisation Zone. In this area several facilities for park management as well as for visitor service, have been constructed. The first guard post was constructed in the late 1970’s. Tanjung Harapan is also an alternative orang-utan rehabilitation center.

Late in the afternoon, search for proboscis monkeys and wild Orang-utan by boat.

The evening at Rimba Lodge is magical. Fireflies come out, and tend to lighting up the pitch black of a tropical night with tiny flying lights. There is also an interesting orchestra of night sounds – from nocturnal animals, cicadas, frogs, and birds. Meals and overnight are provided at the Lodge.

Day 3
RIMBA LODGE – PONDOK TANGUI – CAMP LEAKEY – RIMBA LODGEAfter breakfast at the Lodge, cruise up the river to Camp Leakey to search for giant orang-utan. You will also stop at Pondok Tanggui to see another orang-utan rehabilitation centre. On arrival at Camp Leakey, you will trek into the jungle to observe wild orang-utan in their natural habitats. Trek through tropical rainforest and witness the feeding time at 14.00 hrs. It is not permitted to remain overnight at Camp Leakey. Return to Rimba Lodge late in the afternoon. Picnic Lunch box is provided. Dinner and overnight at the lodge. 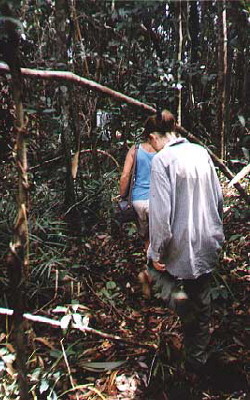 IN THE JUNGLE NEAR CAMP LEAKEY

Breakfast at Lodge then proceed down the river by Klotok to Pangkalanbun and proceed to airport for your flight to Banjarmasin. On arrival in Banjarmasin, transfer to the Arum Hotel. Remainder of day at leisure. All meals provided. 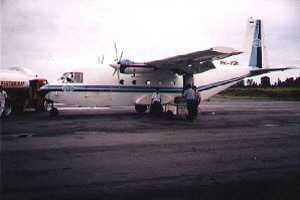 Day 5
FLOATING MARKET – AIRPORTUp early for an enjoyable boat trip along the Barito River to visit the huge floating market. Return to the hotel for breakfast. The remainder of the morning at leisure until you transfer to the airport for your flight to your next destination. 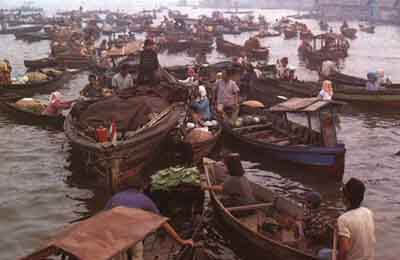 FLOATING MARKET ON THE BARITO RIVER

Photographs on this page are copyright to Trans Borneo Adventure, Rimba Lodge and Indonesia Tourism