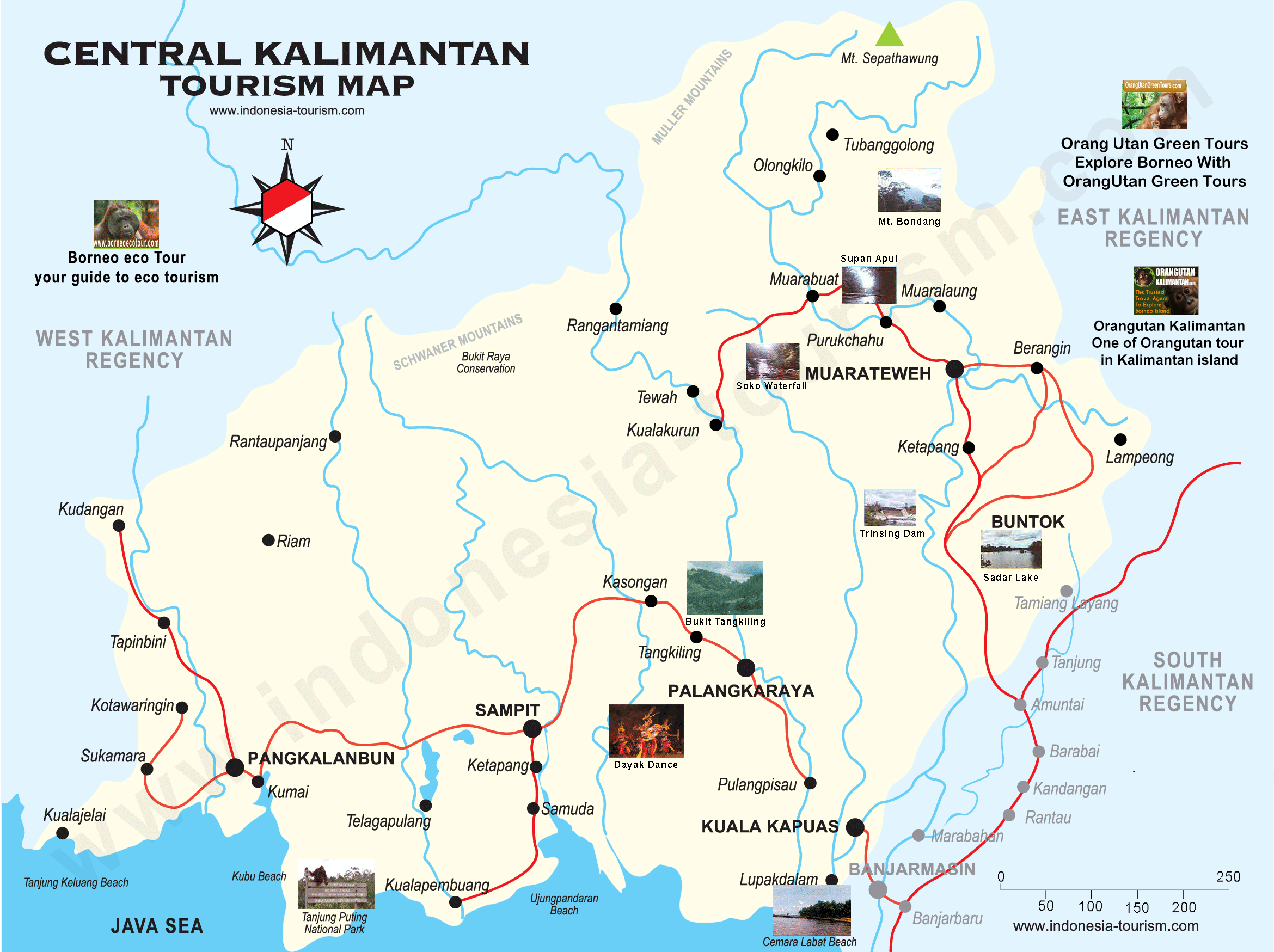 For centuries Central Kalimantan was under the rule of Banjarmasin which had been an Islamic Sultanate since 17th century.

The Banjarmasin of that time was developed with the government structure, complete with the legislation which applied to the entire Sultanate. The rulers of Banjarmasin were, therefore, very powerful on the island of Borneo, while the original inhabitants of Kalimantan (Borneo), the ‘Dayaks’, lived in small communities in rural areas of the island.

In 18th century, between the years 1841 and 1848, a Dutch Geologist,by the name of Schwaner, was involved in the exploration and mapping of the Central Kalimantan region, and travelled along the Barito, Kahayan, Kapuas, and Katingan Rivers. At the same time, he also collected data on the locations of the villages and small communities of the ‘Dayaks’ along the rivers.

To express their gratitude to the Geologist, the mountain range that separates Central Kalimantan and West Kalimantan was then named after him, “Schwaner Range”.

Some time later, between 1880 and 1890, for political and economic reasons, the Dutch Colonials built five canals which link the Kapuas, Barito, and Kahayan Rivers. The purpose of this was to speed up the communications of the area as well as river transportation from rural areas to the terminal at the South-Eastern area of the island.

Based on the system mentioned above, the Dutch used the traditional local leader to carry out the law, especially the laws which are related to money in the villages, such as taxes. The Dutch also used people as free labor or slaves, called Rodi, for the benefit of the Dutch, for example, the making roads, tunnels etc.

In every river system and particular villages, there were a few Demang (Kepala Adat). The job of the Demang was to lead several kampoongs along the river and region which was the responsibility of that Demang, This region is called Kademangan. Besides the Demang, who was responsible for those Kampoongs, there was a Kampoong chief, called Pambakal, who was elected by the people. He had important duties and a great responsibility. His main job was to delegate the tasks ordered, or forced by the colonials, to the people.

After the Dutch left the area, the position was replaced by the Japanese. In this period, Kalimantan became a province, called the Borneo Minseibu with a governor named Cookan. The capital was Banjarmasin.

Central Kalimantan was a part of the larger province of Kalimantan. The division of the government was not changed more than that of the previous one. However, the top rank down to the sub-district leadership of government, were governed directly by the Japanese.

In 1945 the Japanese Occupation was ended by the arrival of the Allies (Australia) in Central Kalimantan. They wanted to remove the weapons from the Japanese troops. At the same time the NICA troops were also on their way.

The last Japanese troops in Central Kalimantan were caught by the Allies on September 27, 1945. They were sent back to Japan from Kumai and Banjarmasin. Automatically, the regions left by Japanese were controlled by the local people, and directly under the Republic of Indonesia, which was proclaimed on 17 August 1945.

The largest problem in Central Kalimantan at that time, was its size and the difficulties in communication. The prime reason is the equipment which was being used was very simple and traditional.

After Indonesia proclaimed its independence in 1945, the carrying out of the Government in Central Kalimantan was still controlled from Banjarmasin, but gradually there came the inspiration and ideas of the people to establish a separate province as an autonomous region.

The inspiration and ideas were based on the fact that most of the economy and trade development in this region was supported by crops and natural resources of the region which were primarily transported using the rivers.

After some great effort and hard lobbying, Central Kalimantan was officially declared by the first President of Republic of Indonesia, Prof. Ir. Soekarno, on 23 May, 1957, to be an autonomous province in Indonesia with ‘Pahandut’ at the confluence of the Rungon and Kahayan Rivers, as the capital city.

Far more than other provinces in the region, Central Kalimantan is dominated by the Dayaks, the indigenous inhabitants of Borneo. The province was created in the late 1950s by subdividing South Kalimantan, in part to give the Dayak population greater autonomy from the Muslim population in the rest of that province. The name ‘Pahandut’ was later changed to ‘Palangkaraya’ which means ‘Sacred Place’, Honorable and Great; with Tjilik Riwut as the first-governor.

Today, Central Kalimantan is the largest province on the island, covering 153,800 square kilometers, most of which is jungle. The Northern area is mountainous and difficult to reach. The central area is dense tropical forest. The Southern area is swampy and has many rivers. The climate is hot and humid.

The three sub-tribes which inhabit this province are the Ngaju, Ot Danum, and Ma’ayan Ot Siang. The Ngaju are nomadic, adhering to the old Kaharingan religion, which is a form of ancestor worship mixed with elements of animism. With approximately 6,000 people, the Ot Danum is the largest among the three sub-tribes. The Ot Danum live in long houses, which sometimes have as many as 50 rooms. The women are known for their skill in plaiting rattan, palm leaves, and bamboo. Like other Dayaks, the men are good hunters, using simple tools.

The art of Central Kalimantan clearly bears the marks of the Kaharingan religion, which is the traditional belief of the Dayaks in the hinterland of Central Kalimantan. Building styles, statues and carvings have been influenced by the Hindus, Chinese, and Hindu-Javanese. Aside from their aesthetic properties, many objects are appreciated for their magic value.

In the local Dayak language, Palangkaraya means ‘holy container’. Palangkaraya can easily be reached with flights from Jakarta, Banjarmasin, Samarinda, Balikpapan and other points on the island. The town has become the centre of government, trade and education of the province. The Regional Museum of Palangkaraya contains a collection of historical and cultural interest from all over Central Kalimantan.

As well as flying, it is also possible to travel from Banjarmasin to Palangkaraya is by speedboat or riverbus. For those who are interested in river sightseeing trips, the journey by riverbus may be a good choice, because during the trip you can see the natural panorama, and if lucky, you will see some monkeys (including proboscis monkeys), hombills and other wild animals by the river. 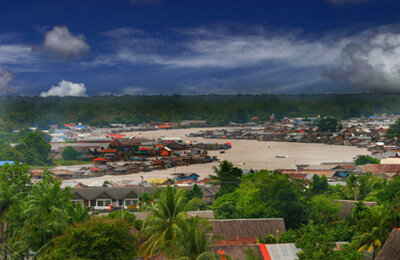 VIEW OF PALANGKARAYA ON THE KAHAYAN RIVER

Places of interest which are often visited in this area are : The Nature Reserve of Bukit Tangkiling (Tangkiling Hill) which lies 34 kilometres North of Palangkaraya. This Reserve is a cluster of eight rocky hills and consists of flat and hilly areas – from the tops of the hills you can enjoy the a panorama of beautiful scenery. The reserve is also part of a legend – the Legend of Batu Banama which forms part of the reserve. (see below)Other places of interest include:

Pangkalanbun is the capital of the Kotawaringin Barat regency, in the western part of Central Kalimantan. Make sure to visit the old Palace of Pangkalabuan, constructed completely out of ulin (ironwood). It is the only Banjar royal legacy found in Central Kalimantan. The Mosque of Kyai Gede is more than 300 years old. Tanjung Puting National Park is a well-known nature and wildlife reserves in the lowland and swamp forests, inhabited by orang utans, owa-owa, bekantan and other primates. Pangkalanbun is the starting point for trips up the Sekonyer River to Rimba Lodge and Camp Leakey where you can visit the Orang-utan Rehabilitation Centre, which is supported by the World Wildlife Fund (WWF). See Camp Leakey – The Gardeners of Eden 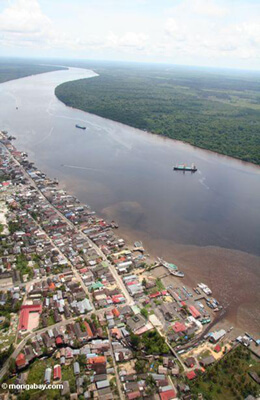 VIEW OF PANGKALANBUN AND THE KUMAI RIVER

Sampit is the capital of Sampit Regency, and is the biggest timber port in Kalimantan as well as Indonesia. Here one can find many sawmills which process timbers for export. Pandaran Beach is a park on the seaside at the mouth of the Sampit River. You will be able to see on its northside, a river emptying its water into the sea, and to the South is the wide expanse of the Java Sea.

The Orchid Park of Pembuangan Hulu is a natural forest and is home to a number of rare and beautiful orchid varieties.

Hunters can engage in their favorite pastime at the Serayan River which borders on the hunting park of Kotawaringin Barat.

Sampit came to prominence due to ethnic fighting in 2001. There have been serious outbreaks of inter-ethnic violence on the island of Kalimantan since 1997, involving the indigenous Dayak peoples and immigrants from the island of Madura, off north-eastern Java. Hundreds of people have been killed and tens of thousands of Madurese forced to flee from the land given to them in the 1950s and ’60s when they volunteered to move to Kalimantan under a government-sponsored programme.

The dominant Dayaks feel resentment at the way Madurese have, as they see it, been favoured. The increased violence in recent years resulted from more difficult economic circumstances faced by both communities. In 2001, in Sampit, at least 500 Madurese were killed and up to 100,000 Madurese were forced to flee. Some Madurese bodies were decapitated in a ritual reminiscent of the head-hunting tradition of the Dayaks of old.

Central Kalimantan is a vast region home to just 1.5 million people and is Indonesia’s only Borneo province where Dayaks are still in a majority.

Kualakapuas is the capital of the Kapuas regency, located South of Palangkaraya, on the Kapuas River 40 kilometres from Banjarmasin.

A well-known tourist attraction is “Telo” Island, a pleasant fishing village and port. For the adventurer, white-water rafters and nature lovers, there is Gohong Rawai, known for its beautiful and challenging rapids. The gold mines of Teweh and Batu Api, in Rungan district, are also interesting sites to be visited. In this region, gold mining is a major source of income for the people, who pan for the valuable metal using the old traditional method. Gold mines are found in many places in Central Kalimantan.

Photographs copyright to Mongabay.com – Rhett A. Butler (Pangkalabun), begundals (Palankaraya)  and Indonesia-Tourism.com
Much of the Information on this page has been derived from various Indonesian Embassy links