AUSTRALIANS (commonly known as the ANZAC forces from their role with New Zealand during the First World War) played a significant role in Borneo during the Second World War. Sandakan was the place where the many Australians spent time in a prisoner of war camp, and was the starting point for the infamous death marches to Ranau.

After the fall of Singapore and Borneo to the Japanese, a prisoner of war camp was established just outside of Sandakan to house approximately 750 British and more than 1650 Australian prisoners who were sent to the camp during the period 1942-43. In 1945, when the Japanese started to realise that the war may have been lost, and the Allies were closing in, the emaciated prisoners were force marched, in three separate marches, to the village of Ranau in the jungle, 250 km away, under the shadows of Mount Kinabalu. On 28 January, 1945, 470 prisoners set off, with only 313 arriving in Ranau. On the second march, 570 started from Sandakan, but only 118 reached Ranau. The third march which comprised the last of the prisoners from the Sandakan camp contained 537 prisoners. Prisoners who were unable to walk were shot. The march route was through virgin jungle infested with crocodiles, snakes and wild pigs, and some of the prisoners had no boots. Rations were less than minimal. The march took nearly a year to complete.

Once the surviving prisoners arrived in Ranau, they were put to work carrying 20 kg sacks of flour over very hilly terrain to Paginatan, over 40 km away. By the end of July, 1945, there were no prisoners left in Ranau.

This part of the war is considered by many to be the worst atrocity ever suffered by Australian soldiers, and compares to the atrocities of the Burma Railway, where fewer Australian POW’s lost their lives.

Those that survived the ordeal of the march, did so only because they escaped into the jungle where they were cared for by local natives.

An Australian Memorial honouring the survivors, POW’s, local civilians who help to clandestinely feed the prisoners, and soldiers who perished at Sandakan and during the death marches into the jungle, has been erected at what was the Prisoner of War Camp in Taman Rimba close to the city of Sandakan. There are just a couple of rusting bits of machinery around, and the place has an eerie air about it. 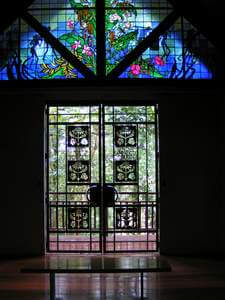 The Sandakan Prisoner of war camp has now been transformed into a very beautiful park with a pavilion on site which houses the history of this very tragic period.

After the war, much of the original Death March route became completely overgrown. Some of it became what is now the main road from KK to Sandakan. What is left of the track, however, was in 2005 rediscovered after nearly 60 years of neglect. It is now possible to walk the Death March track as either a 3, 6 or 8 day tour. All treks end in Ranau, but start at various points along the route. The three day and six day trips begin in Nabutan, although the 6 day tour spends time in Sandakan visiting the POW camp, and visits important points along the route on the way to Nabutan. The 8 day trip incorporates 6 days of trekking from Bauto to Ranau as well as the start in Sandakan.

Contact us for details of the Death March trips.

Further information about the role of Australians in Borneo during the Second World War can be obtained by contacting the following:

1. Hornsby RSL Headquarters Tel: 02 9264 8188(They have a library which you would need to physically visit)

ABC Television in Australia www.abc.net.au has also screened on a number of occasions since 1995, a video which was shown on the television programme “True Stories”  called “Return to Sandakan” made by Australian director Ray Quint. The video can be purchased by contacting:

Following is a selected bibliography provided to us by the Australian War Memorial in Canberra. This may be of interest to anyone who would like to know more about the war in the Borneo region.

Sources available in the Research Centre of the Australian War Memorial

The material listed in this bibliography is available for use in the Research Centre of the Memorial during opening hours. It is not available for loan, although interlibrary loan may be arranged through your local library service. Your local library service may be able to access ABN (The Australian Bibliographic Network) for material held by major Australian libraries, including the Memorial, on your topic. Other material may be held in the Photograph, Film, Private and Official Collections of the Australian War Memorial. These Collections can be searched in the Reading Room of the Research Centre.

Sources Available in the Research Centre of the Australian War Memorial

Benson, James. Prisoner’s Base and Home Again: the Story of a Missionary POW. London, Robert Hale, 1957.

Cassells, Vic. For those in peril. A comprehensive listing of the ships and men of the Royal Australian Navy who have paid the supreme sacrifice in the wars of the twentieth century. Kenthurst, NSW, Kangaroo Press, 1995. [HMAS Perth].

Clarke, Hugh V. A life for every sleeper: a pictorial record of the Burma Thailand railway. Sydney, Allen and Unwin, 1986

Parkin, Ray. Into the Smother: a Journal of the Burma Siam Railway. London, Hogarth Press, 1963.

Parkin, Ray. The Sword and the Blossom. London, Hogarth Press, 1968.

Rivett, Rohan. Behind Bamboo: an Inside Story of the Japanese Prison Camps. Sydney,  Angus and Robertson, 1946.

Simons, Jessie Elizabeth. While History Passed: the Story of the Australian Nurses who were Prisoners of the Japanese for three and a half years. Melbourne, William Heinemann, 1954.

Taylor, Betty, To Hell and Back His Own Story: A Soldiers story of his years as a prisoner of war of the Japanese, Bega, Easiprint, 1996?

Wall, Don. Singapore and Beyond: the Story of the Men of 2/20 Battalion Told by Survivors. Collaroy Plateau, NSW, the Book Committee, 1984.

Whitecross, Roy. Slaves of the Son of Heaven: the personal story of an Australian prisoner of the Japanese during the years 1941-1945. Sydney, Dymock’s Book Arcade, 1951.

The material listed in this bibliography is available for use in the Research Centre of the War Memorial during opening hours. It is not available for loan, although an interlibrary loan may be arranged through your local library service. Your local library service may be able to access ABN (The Australian Bibliographic Network) for material held by major Australian libraries, including the War Memorial, on your topic. Other material may be held in the Photograph, Film, Private and Official Collections of the Australian War Memorial. These Collections can be searched in the Reading Room of the Research Centre.

Other books and journals which may be of interest, include:

Small but Irritating Bites: The AGAS Operations of “Z” Special Unit in Borneo 1945 – Sabretache – Journal of the Military Historical Society of Australia Vol 51 No 3 September 2010

Kevin Smith is a prolific author and speaker on topics of military history, with a special interest and skill in researching and telling the story of Australian prisoners of war in Borneo during World War 2.

Please note that we are in the process of adding new material on the war from the Labuan, Brunei and Tarakan regions of Borneo – has anyone got information which would be useful? Contributions please!!

If anyone has any information which is relevant to this section, please do not hesitate to email us with details, and we will endeavour to include it here. Any photographs which are available would be most welcome.