The Temburong District is separated from the rest of Brunei by Brunei Bay and a sliver of Sarawakian territory. Temburong hovers to the northwest of Bandar Seri Begawan, summoning visitors to take the short step into another world.

The Temburong District is rich in unspoiled natural heritage, including the Ulu Temburong National Park (formerly the Batu Apoi Forest Reserve). Here the magnificence of Borneo’s lowland rainforests can be truly experienced. Botanically, the area possesses astounding diversity, however the casual visitor in search of birds or mammals is likely to be disappointed by the apparent lack of fauna. In fact the forests teem with wildlife, but these creatures are invariably shy and are quick to avoid human contact. The best time for viewing the wildlife is at dawn or dusk.

On the river trip to Bangar , which is Temburong District’s main town, you will see monkeys in the mangroves and monitor lizards basking in the sun at low tide. Some patches of land have been cultivated by resident Murut and Iban Malays, virgin rainforest flourishes across the greater part of Temburong.Frequent speed boat ferry services are available between Bandar Seri Begawan and Bangar. The river trip takes less than an hour. There is no departure schedule, boats leave when they have collected 12 passengers. The last boat from Bangar to Bandar Seri Begawan departs at 16.00 hrs.

Temuai (dug-out longboat) can be hired in and around Bangar to go up-river and are still the best way of experiencing the jungle waterways of Borneo.

The park has many unusual cave and rock formations, and the 1070 ha territory is also home to a variety of readily seen wildlife such as Borneo’s native kijang (deer).

The patch of level stone on Bukit Patoi’s summit is used as a helipad, and cooled by a pleasant breeze, it is also a viewing deck from which to enjoy panoramic views of the jungle, sea and villages and fields of neighbouring Sarawak.

It takes about two hours to negotiate the 1.6km-winding trek to the park. 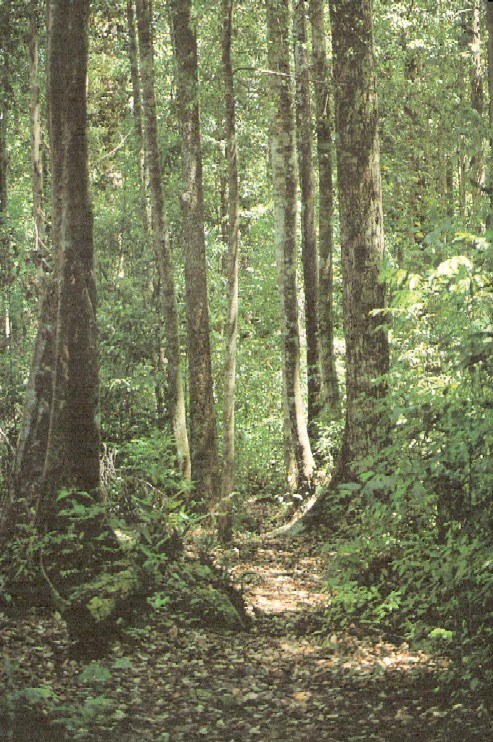 In addition, a series of tree houses some situated 20m above the ground, and linked by hanging bridges, provide excellent observation points.

The Ulu Temburong Park Headquarters and Information Centre, is located at the junction of the Temburong and Belalong Rivers. Access to the park is by temuai or longboat, and visitor accommodation within the park consists of some seven guesthouses and three well equipped campsites. 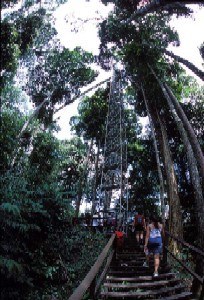 Short trekking tours through farmlands and virgin forest to the Ulu Temburong National park are ideal for those who enjoy, or would like to try, jungle trekking. See our Temburong tours for some ideas.