The Omar Ali Saifuddien Mosque is dominates the city centre of Bandar Seri Begawan. It is one of the most magnificent mosques of South-East Asia, and a symbol of the strong Islamic faith of the people of Brunei.

The mosque was completed in 1958 and is named after the 28th Sultan, Omar Ali Saifuddien, who is still referred to as the architect of modern Brunei. The mosque’s design reflects the use of the world’s most elegant materials, including marble from Italy, granite from Shanghai, stained glass and chandeliers from England and carpets from Belgium and Saudi Arabia. 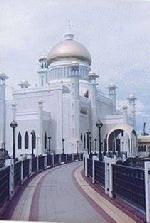 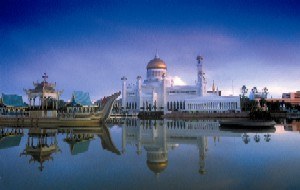 Located in a lagoon beside the mosque is a replica of a 16th Century mahligai barge, which was used to stage colourful religious ceremonies such as the Koran reading competitions during the 1960s and early 1970s. You will be required to remove your shoes prior to entering the mosque, and you should also be dressed conservatively.The mosque is closed to non-muslims on Thursday. Access is restricted to late afternoon on Fridays.

Early European visitors to Brunei described Kampong Ayer, or Water Village, as the Venice of the East. Today, visitors continue to be fascinated by these traditional and historic houses built on stilts over the water, spanning the greater part of the Brunei River.

Kampoung Ayer is home to about 30000 people and is accessible by boat or by wooden bridges from Bandar Seri Begawan. 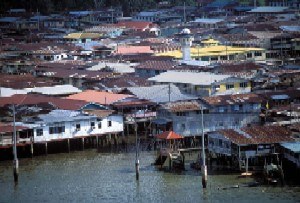 The houses in Kampung Ayer are joined be a maze of interconnecting timber walkways, and visitors are free to roam at their leisure. The government has provided every modern facility for the residents, including schools, clinics, police station and mosques. A visit to Brunei would not be complete without a trip to the this unique and intriguing place.

On the “road” in the Water Village 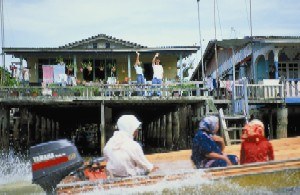 Armoury Display in the Royal Regalia 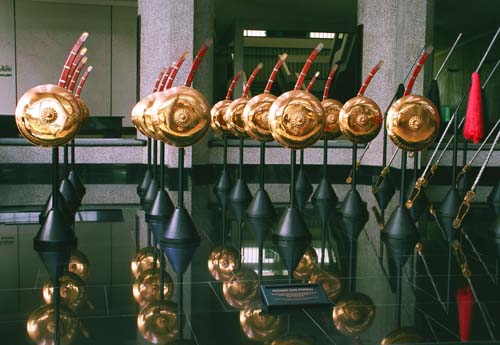 The Royal Regalia Building is located in the heart of Banda Seri Begawan. It was built to commemorate the Silver Jubilee of the Sultan’s accession to the throne in 1992. The museum is home to a collection of royal regalia, including the royal chariot, gold and silver ceremonial armoury, the jewel encrusted crowns used during the coronation and a replica of the throne, which is used by the Sultan on state occasions. There is also an exhibition which fully documents the history of the constitution of Brunei.

The building is open to the public every day of the week (on Friday the opening hours are shorter than the rest of the week) Shoes should be removed prior to entering the building.

The Brunei History Centre was established in 1982. It was founded to undertake research into the rich history of Brunei. Among the areas of special interest are the genealogy and history of the Sultans of Brunei and the Royal family.

The centre located next to the Royal Regalia Building. It is closed on Friday.

Another magnificent building in the Bandar Seri Begawan is the Royal Ceremonial Hall, better known as the Lapau, where the present Sultan was crwoned on 01 August, 1968. An exquisite golden dome highlights the Lapau’s interior. Traditional royal ceremonies are normally held here. Adjoining the Lapau is the Dewan Majlis, or Parliament House.

This is one of the oldest recreational parks in the city. It has a natural waterfall and lake, and features a beautiful garden of trees and flowers. For those who want to get away from the noisy traffic of the city, this park is an ideal place to spend some time. It will take about 15 minutes to walk to the park from the Lapau. Brunei Shell, as part of their community work, has also installed an 8 metre high wall for those interested in climbing.

The Tamu, or open air market, is situated on the banks of the Kianggeh River in central Bandar Seri Begawan. Here, one can find a wide variety of items including local dishes, fruit and vegetables, flowers and handicraft.The Tamu is open every day from morning to late evening.

A market stall at Kianggeh 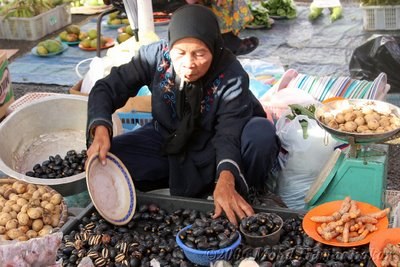 The most impressive site in Bandar Seri Begawan is the Sultan’s Royal Palace, known as the Istana Nurul Iman. It is the largest residential palace in the world, and its golden domes, vaulted roof and riverside setting make it a spectacular subject for photographs. The palsce is open to the public only during Hari Raya, when residents and visitors alike have the opportunity to greet the Sultan and members of the Royal family. 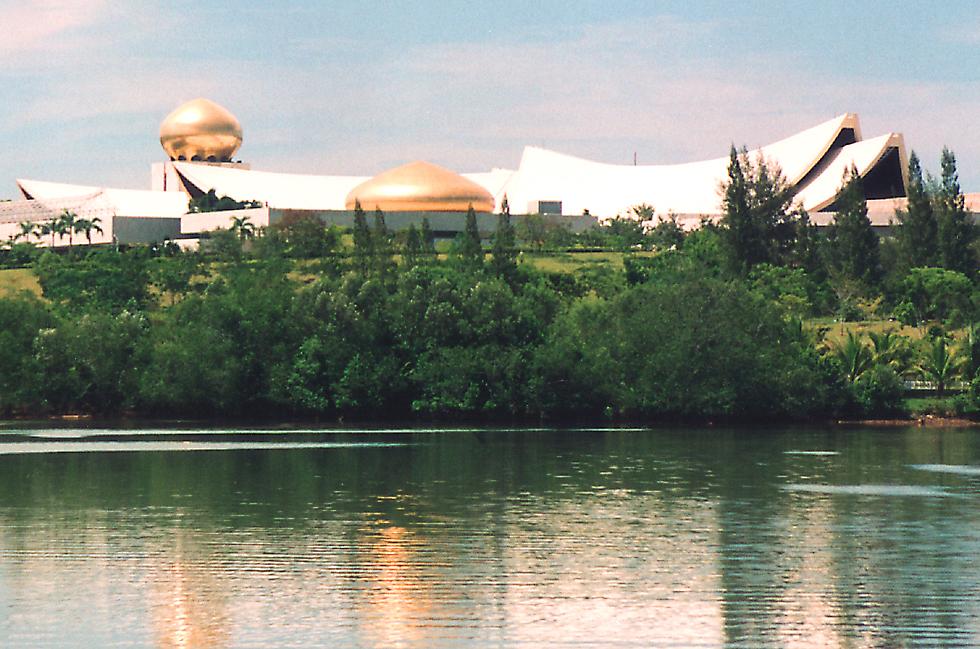 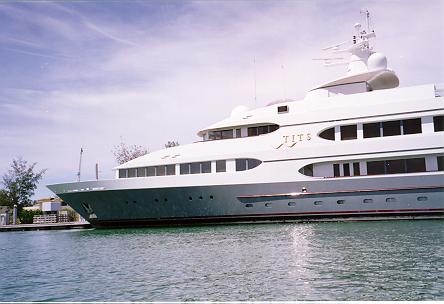 The best view of the Istana is from Persiaran Damuan, which is a park along the river bank off Jalan Tutong. It has walkways, a well-equipped playground and features six outdoor sculptures by ASEAN artists, on the theme of Unity in Diversity. The Persiaran Damuan is popular for jogging and has several foodstalls in the evenings.

Adjacent to the Omar Saifuddien Mosque stands an imposing addition to the skyline and waterfront. It is a commercial and shopping complex, designed to generate revenue for a foundation dedicated to the welfare of the people. It is a personal initiative of the Sultan, and is testament to his abiding concern for the well being of the people of Brunei. The complex is designed with an amalgamation of both the traditional Malay and modern architecture. Its main walkway features excellent views of the Omar Ali Saifuddien Mosque at one end and Kampung Ayer at the other.

The shopping complex, opened in July 1996, contains the largest selection of shopping facilities in Brunei. With the Yayasan Sultan Haji Hassanal Bolkiah Foundation Complex, Bandar Seri Begawan has created a completely new image of the city centre, making it a major tourist attraction.