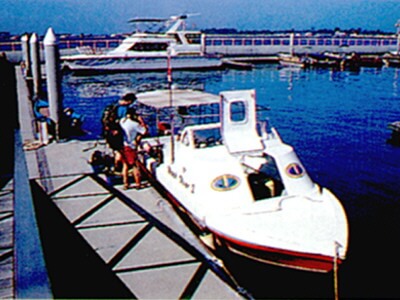 Labuan Island is located about 115 km south of Kota Kinabalu and lies 8 km off the mainland of Borneo, near the Northern mouth of Brunei Bay. The island is currently Malaysia’s International Offshore Financial Centre. It has played a central part in Borneo trading history, with the first record of trading being visits by Chinese junks visiting the Sultanate of Brunei. In the 1800s, Britain and other colonial powers, used Labuan as a trading and coaling station. The island saw a lot of action from both the navies and the air forces of the Allies and the Japanese during the Second World War – nearly 4000 Australian, New Zealand and British troops are buried in Labuan War Cemetery.
Labuan can be reached on daily flights direct from Kota Kinabalu, Miri and Kuala Lumpur, or alternatively, by high speed ferry from various ports in Sabah, Sarawak and Brunei Darussalam. Accommodation is available in a full range of hotels, ranging from 5 star hotels and resorts, to budget hotels and guest houses.There are currently four identified shipwrecks where you are able to dive near Labuan – two from World War II and two from the 1980s. The ships lie in 30 to 35 metres of water. Visibility varies greatly from season to season – from something in the order of 6 metres to 20 metres, depending on the season. The diving ranges from Novice to Serious wreck diving – serious including penetration into the hulls of the vessels. You must have “Wreck Diver” certification to be able to do the two wrecks where hull penetration is permitted. The Dive spots near Labuan include: 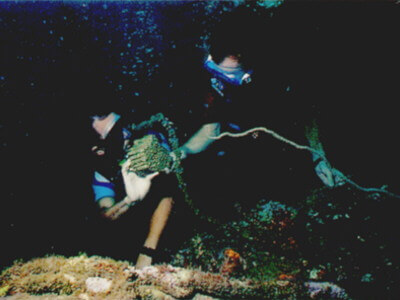 The American Wreck was identified as the US Navy minesweeper USS Salute which sank on 08 June 1945 after hitting a mine during the allies pre-invasion sweep of Brunei Bay. 9 crew lost their lives. She was the only US minesweeper of her class which sank during the war. She was built in the US in 1943, and in her short life earned five Battle Stars and a US Navy Unit commendation. 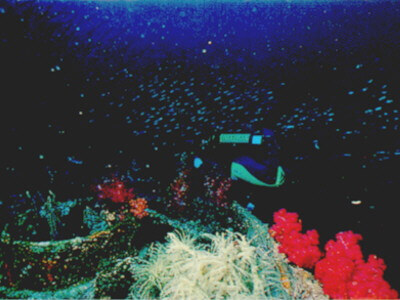 PART OF THE AMERICAN WRECK

The wreck lies about 24 km off the coast of Labuan on the Barat Banks. The ship buckled amidships when she sank, with the bow folding back over the stern section. She sits on a hard sand bottom in 33 metres of water with her shallowest part at 18 metres. This is a hard core wreck divers wreck, as it takes experience, caution and patience to explore and penetrate.
The Cement Wreck is located about 21 km off Labuan, East of Kuraman Island. It is a 105 m long modern freighter, named Tung Hwang when it sank on 25 September, 1980. It was carrying cement to Brunei for the construction of the Sultan’s new palace, when it hit the Semarang Bank, badly damaging its hull. All crew were rescued. The boat sits perfectly upright in 30 m of water. The masts are at 8 m, and the roof of the wheelhouse is at 14 m. The main deck is at 19 m. This is the easiest wreck to navigate and the best for wreck diving training. It is also the most photogenic. 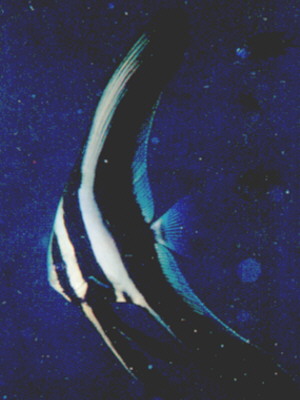 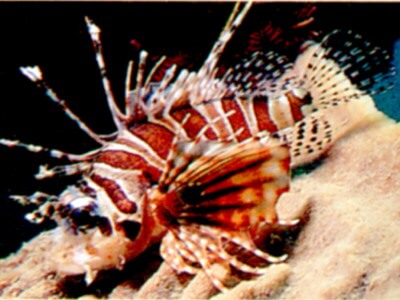 SMALL SCORPIONFISH FOUND ON THE DECK OF THE CEMENT WRECK

A large amount of hard and soft corals grow on the metal surfaces of the wreck, and the fish population is the best of all the wrecks. Huge schools of Barracuda surround the masts at the stern, and there are lots of colourful reef fish all over the wreck – anthis, lionfish, scorpionfish, butterflyfish, big grouper, and turtles.Experienced wreck divers are permitted to penetrate into the hull into the cargo holds, crew accommodation and engine rooms. The novice diver will find this one an excellent one to get started in wreck diving. The photographer will also have many wide angle opportunities including upward silhouette shots. 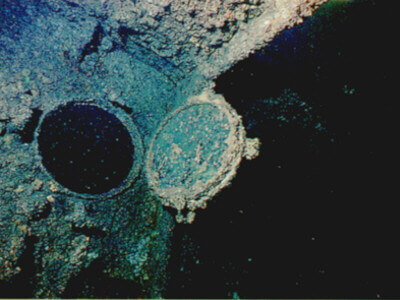 BRONZE PORTHOLES ON THE AUSTRALIAN WRECK OF THE CEMENT WRECK

On 05 September, 1945, she set out from Singapore, bound for Manila. On 16 September, she struck a mine off the coast of Labuan and sank. The wreck lies about 23 km off the island on the Barat Banks, and about 1.5 km from the American Wreck, lying in about 33 m of water. 339 people lost their lives when the ship went down – 308 workers, 26 comfort women and 5 Japanese soldiersThe wreck lies on its port side in 33 metres of water on a hard sandy bottom, with its shallowest point at 21 metres. The wooden decks have long since disappeared
There is a wide variety of marine life on the wreck, especially large lion fish, pelagic fish and soft corals. It is also home to the elusive frog fish. The experienced wreck diver will find penetrating the hull interesting. The spot is a natural for wide angle photography.
Thanks to Borneo Divers and Sea Sports SDN BHD which supplied information for the above. Also to Barry Andrewartha of Sportdiving Magazine for the photographs and some of the text. Cover photo copyright to Steven Ng
Scuba Diving in Borneo
Call Us now (+61 7) 3221 5777
×